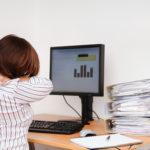 Making the same motion hundreds of times a day, like striking keys on a keyboard, can result in repetitive workplace stress injuries, also known as occupational disease. In NYS, repetitive stress injuries (RSI) are known as an "occupational disease" or "occupational claim." By either terminology, same is defined as any cumulative trauma disorder or repetitive strain injury that develops from using the same tendons and muscles in the same manner repeatedly over time, pushing those muscles and tendons beyond their capabilities

The majority of claims brought before the NYS Workers Compensation Board are based upon a specific accident/incident happening that caused injury and resulting disability. However, there are those types of claims that are not fact-specific to an event, but fact-specific to an occupation where the disability occurs slowly over the course of time due to the repetitive nature of the particular task at hand.

According to the Occupational Safety and Health Administration (OSHA), the quickest-growing type of on-the-job injury is the occupational disease. OSHA estimates that $1 in $3 spent in Workers’ Compensation benefits is directed toward workers suffering from these types of claims, and one in every four reported workplace injuries is a form of repetitive stress.

When injuries accrue slowly over time and result from seemingly mundane and low intensity tasks, employees can still suffer injury and be rendered disabled. If that happens, they are entitled to every single benefit that NYS compensation law provides to workers injured in an accidental circumstance. These are often difficult and time-consuming cases to present and prevail over. However, it can be done if one has an understanding of the facts of the case and the "law target."

NYS case law Workers Compensation states "It is axiomatic that a claimant bears the burden of establishing a causal relationship between his or her employment and a disability by the proffer of competent medical evidence" (Matter of Williams v Colgate Univ., 54 AD3d 1121 [2008].

The medical opinion need not be expressed with absolute or reasonable certainty (Matter of Norton v North Syracuse Cent. School Dist., 59 AD3d 890 [2009]). It must, however, be an indication of sufficient probability as to the cause of the injury, and the medical opinion must be supported by a rational basis (id.). "Mere surmise, or general expressions of possibility, are not enough to support a finding of causal relationship" (Matter of Mayette v Village of Massena Fire Dept., 49 AD3d 920  [2008].

Thus, questions of credibility, reasonableness, and relative weight to be accorded to conflicting evidence are questions of fact that come within the exclusive province of the Board (see Matter of Berkley v Irving Trust Co., 15 AD3d 750 [2005]).

In defending such cases, insurance companies will typically contend that the worker's stress injury was present long before the employee commenced work with the employer. Carriers will also contend there is no medical evidence asserting a specific injury over time, causally related to a work task. That is to say, that there are no medical records evidencing that a distinctive feature of the claimant's employment caused or contributed to the RSI.

RSIs can even include hearing loss, resulting from years spent working with loud machinery or in sound or music engineering. When one thinks of such claims in the eyes of an everyday worker, crystallized through the periscope of practicality and reasoning, it's not too hard to come out at the end of the day not only understanding these cases and depth, but winning them with ease.

Practice and practicality rule the roost. RSIs come in many forms, and affect both office workers and physical laborers alike. The most commonly-reported RSI is carpal tunnel syndrome, which can arise from typing or repetitive motions with a mouse, as well as from repetitive machine work and assembly tasks. Back injuries received from years of lifting heavy boxes and objects are also common forms of RSI, and can be debilitating and career ending. Employment in a grocery store can result in RSIs. Think of it this way, if you continue to stretch out a rubber band beyond its design limits, that rubber band becomes useless.

If you have been injured on the job in NYS, and/or need assistance navigating the Workers’ Compensation, NYS Disability Retirement, or the Social Security Disability process, I would be glad to help or answer any questions. I am Peter M. Cordovano, and can be reached at 845-691-4200.