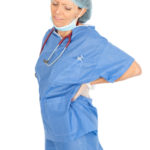 Healthcare workers such as nurses, nurse’s aides, and doctors work with people at their most needy, including at times when patients may be immobilized by an illness, suffering from ill effects of an illicit drug, or when they have harmed themselves as the result of a mental illness. These and other factors all contribute to the fact that healthcare workers are, as a group, one of the most injury-prone sectors of the American workforce. Read on to learn more about the risks healthcare employees face in the workplace.

A 2015 study conducted by the US Department of Labor examined how often workers in hospitals were injured on the job. According to their research, some 58,000 hospital workers received work-related injuries in a single year. This amounts to a share of over 6% of all hospital workers that are being injured at work each year. The Department of Labor reports that this is over twice the rate of injury in other private sector jobs. The study focused on workers in a hospital setting, but many of the study’s findings could apply equally to healthcare workers in other settings such as assisted living or rehabilitation facilities.

The type of injury found to be most common by the study resulted from overexertion. Many doctors and nurses work very long shifts, on their feet nearly all day. Many of the tasks of a medical professional can be physically demanding, such as moving patients to change bed linens and prevent pressure ulcers, helping to bathe a patient, or relocating a patient from a wheelchair to a bed. While such tasks were always challenging, they have been made more so by an increase in the average weight of US citizens, resulting in greater chances of muscle sprain or tear from moving patients. Additionally, the average age of nurses has risen to 44 years old, increasing further the risk of injury to workers due to their advanced age. As we explained in a previous post, healthcare workers are also more likely to be injured by a violent act while on the job than are many other workers.

While work with sick and injured patients will always be physically demanding to some extent, there are ways that a responsible hospital or facility can reduce the risk of injury to workers, such as by following Occupational Safety and Health Administration protocols regarding moving patients, adequate staffing, and violence prevention. Workplaces that fail to care for their employees in this way are neglecting an important duty under the law and leaving their workers at risk of injury.

If you believe your employer has left you vulnerable to injury, or if you’ve been hurt on the job in New York, seek legal help in getting the compensation you need and deserve for your injuries by contacting the seasoned and knowledgeable Highland workers’ compensation and disability retirement attorney Peter M. Cordovano for a free consultation, at 845-691-4200.